We Finished Under Budget!

Recently, we received a call from a homeowner who had seen some unsightly damage to their roof after a particularly nasty storm. They gave us a call to handle the repairs, and were really glad they did. Not only did we do an excellent job working on their home, but we helped them handle their insurance claim with ease. In the end, we turned out to be the right Cedar Rapids roofing contractor for the job

When we received the call, we assured them that we would meet them at their property at a time that could work with their schedule. It is always important for us to act with honesty and integrity, and that means being transparent with our process the whole way through. We met with the homeowner and inspected the damage. It certainly was pretty severe damage from the storm, as the roof almost looked as if a boulder had hit it! However, the extent of the repairs were perfectly within our wheelhouse, so we were able to take on the job. We started that process by providing the homeowner with a detailed estimate explaining exactly what would be doing and what the costs would be. After the homeowner had a quick conversation with his spouse, they were ready to go. We scheduled our team to start work later that week. 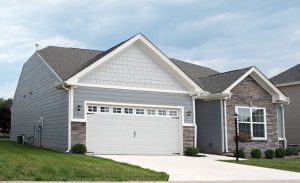 Thankfully, the stormy weather didn’t persist. Our crew had great fall weather on their backs as they worked to repair the roof. During the repairs, we were able to suggest a couple of maintenance items that the homeowner agreed to. They weren’t overly extensive or expensive, and they seemed happy to be working with a company that paid attention to the details! We just wanted to make sure that they would be protected by the roof over their heads if a severe storm came through again in the future.

Once we were finished, the homeowner was very pleased with a job well done. He remarked that it looked like it had never been damaged in the first place, and was thrilled at how easy and painless the whole process was for him. It definitely was satisfying for our crew members to hear the positive feedback, and of course to have completed another job well done!

Complete this form to request a quote

A representative from Greiman Construction Services, LC will respond within 24 hours.

What Our Customers Say

WANT TO GET MORE INFORMATION?